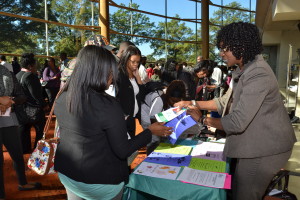 Employers will flock to Southwest next Friday.

The D.C. Job Fair will be held at Arena Stage on Friday, Feb. 20, the theater announced. The free event hosted by Ward 6 Councilman Charles Allen and At-Large Councilwoman Elissa Silverman will be open to all and offer resources to ex-criminal offenders.

Companies expected to attend the job fair from 10 a.m. to 2 p.m. include Giant Food, Big Bus Tours, Clark Construction at The Wharf and D.C. Water, the theater’s website says. Dress for Success, So Others May Eat and the Department of Employment Services are also expected to be there.

The biannual event was last held in October, when about 1,500 job seekers attended. An official at the city’s Office of Returning Citizen Affairs said then that job fair aims to meet ex-offenders’ needs.

“We have to bring opportunity to their level,” Victor Battle said. “A lot of time they think it’s out of reach.”

more stories
Previous
‘Re-Estate’ and Neighborhood Revitalization: When and Why Is Profit Realized?
Next
Suspect Arrested for Month-Old Murder Near Nationals Park