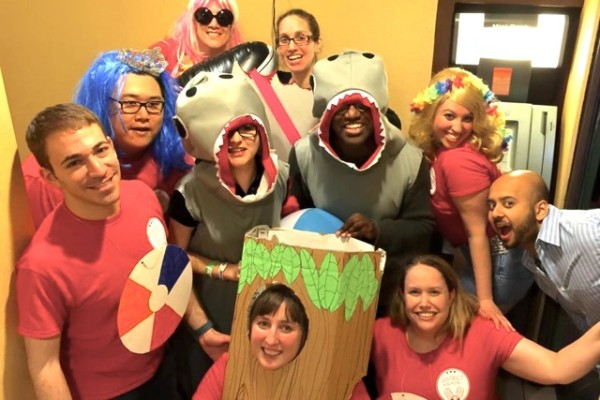 The man who started what he believes is the largest competitive karaoke league in the country lives in Hill East, and he wants you to sing along.

Now in its fourth year, District Karaoke will open signups next month for its spring season of organized, team karaoke.

Joining forces with friends or strangers, members sing at one bar for 10 weeks, competing with other teams for a chance to win the citywide finals. Bar-goers select the best performers using a custom-made smartphone app. The league with team shirts and a comprehensive rulebook is for singers good and bad, founder and “commissioner” Jesse B. Rauch said.

“Singing has nothing to do with karaoke,” said Rauch, who by day works for the D.C. government. Rather, it’s about being a good performer. “The only requirement is, are you able to have a good time?”

The league will try some new activities this season, including a Prop Swap Happy Hour where participants bring accessories to trade. On Monday night at Irish Channel (500 H St. NW), a team recreated the Katy Perry halftime show with a giant inflatable whale and two shark costumes, Rauch said.

The league with about 250 members in D.C. — plus New York and Los Angeles divisions — will also likely start a Jenga championship this spring.

“If people are looking for something fun and something different in their lives, District Karaoke is the place to do it, said Rauch, whose own favorites are “Runaround Sue” by Dion, “Bust a Move” by Young M.C. and “Be Our Guest” from “Beauty and the Beast.”

“If you’re not having a bat-s–t good time, you’re doing it wrong,” he said.