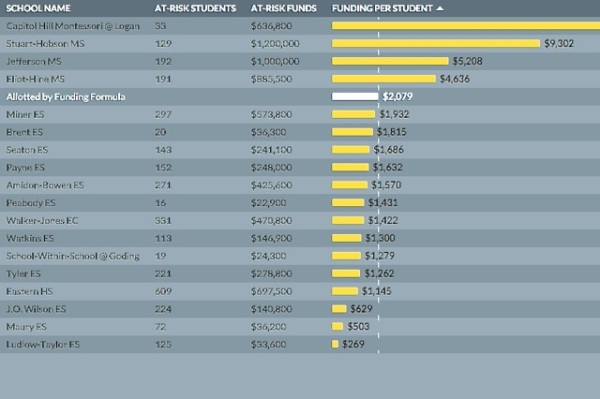 Eastern High School has more at-risk students than any other public school in Ward 6, but schools with less need received more per-student funding.

A new interactive graphic shows the designated at-risk funds provided to every D.C. public school in 2014, compared with the number of students eligible to benefit from the money.

The D.C. Council voted in Dec. 2013 to provide $2,097 in extra funding for every student who is receiving welfare or food stamps, homeless, in foster care or is at least a year behind in high school. But because of a time crunch in the budget process, the funds were used to support programs D.C. Public Schools said were aligned with the needs of at-risk students, as Greater Greater Washington reported.

Here are some of the highlights of the data mapped by the D.C. Fiscal Policy Institute and the volunteer “civic hackers” group Code for D.C.:

The full interactive graphic can be explored here.

more stories
Previous
Halftime Sports Bar Liquor License to Be Reviewed by Attorney General
Next
Hill Pets of the Week: Bailey and Phoebe