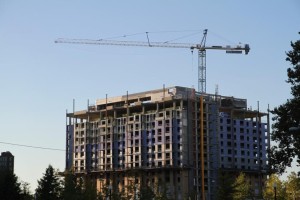 Building is booming on Capitol Hill and in Navy Yard.

An estimated 5,198 apartments will be under construction in the neighborhood by Dec. 2017, according to data released today by the D.C. Office of the Chief Financial Office.

Fourteen apartment buildings are under construction or marketing homes now, for a total of 3,009 units, the report says. An additional nine buildings, with 2,189 units, are expected to be underway by the end of 2017. An additional 15 buildings with 3,837 units are rumored, according to the report.

More new apartments are expected in what the report called the “Capitol Hill/Riverfront” area than anywhere else in the city. The data accounts for development plans as of Dec. 2014.

In NoMa and on the H Street corridor, 3,414 units are expected to be under construction by Dec. 2017. An additional 13 buildings with 3,071 units are rumored, the report says.