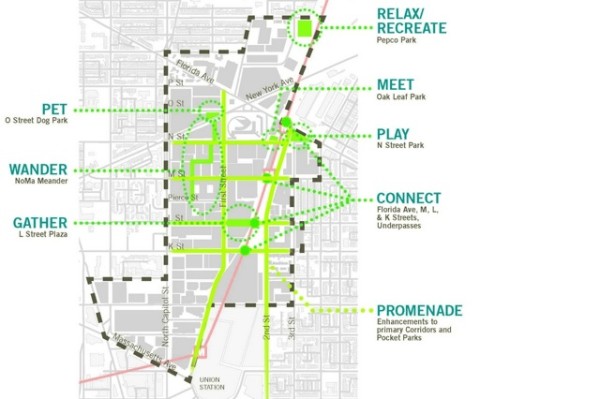 NoMa is growing fast but has no public parks — yet.

A website launched this week shows where parks are being planned in the neighborhood and how locals can engage in the process.

The NoMa Parks Foundation site shows green spaces envisioned, including Pepco Park — a two-acre plot of land owned by Pepco, north of New York Avenue, near the Metropolitan Branch Trail. That space could provide room for grilling, a garden or an amphitheater, the site says.

The site was launched to involve NoMa residents in planning parks, according to NPF president Robin-Eve Jasper, who is also president of the NoMa Business Improvement District.

“We want the NoMa Parks Foundation and its initiatives to be as transparent as possible,” she said in a statement. “NoMa parks are going to be fantastic, and will embody the aspirations of the NoMa community for great spaces to gather, play and enjoy the great, urban outdoors.”

The site will be updated with information on community engagement sessions and park events, NPF said. The group was formed in 2012.