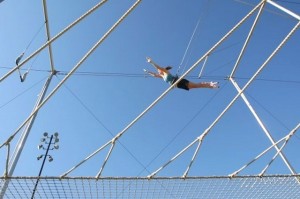 The trapeze school in Near Southeast will pack up its nets and move west.

The previously announced move of Trapeze School New York – Washington DC will occur this fall, instructor and spokeswoman Laura Wooster said in an update. The school now at 4th and Tingey streets SE will decamp two blocks west to N Street and New Jersey Avenue SE. There, students will be able to try classes in flying trapeze, static trapeze, trampoline and silks, in which performers pose from dangling pieces of fabric.

“We are excited to remain a part of the The Yards community in the Capitol Riverfront, and cannot wait to show our current and future students a brand-new school facility, featuring indoor and outdoor flying trapeze rigs,” Wooster said by email.

The school’s current home is the future site of a 10-floor condo building with 130 units, JDLand reported.

more stories
Previous
Bitter Cold to Let Up Some, But Strong Winds Are on the Way
Next
NoMa Parks Plan Shown on New Website