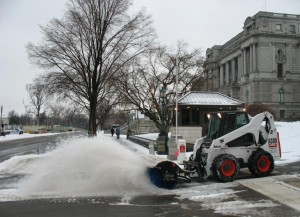 (Updated at 9:40 a.m.) Ward 6 residents are waking up to 4 to 6 inches of snow, which has cancelled school and thrown off transit.

Schools, D.C. government offices and federal offices are closed, and all Metro bus service has been suspended.

We’ll have a high of 29 degrees and a low of 16, according to the National Weather Service. Last night, 5 to 9 inches of accumulation were predicted.

A D.C. snow emergency went into effect at 7 a.m. Here’s everything you need to know about Metro, parking and more:

Schools: D.C. Public Schools are closed, according to an announcement made 10 p.m. Monday.

Federal Offices: The U.S. Office of Personnel Management announced that federal offices in the D.C. area are closed.

Metro: Limited bus service will be resumed at 10:30 a.m., after all bus service was suspended. The 90, 92 and X2 buses will run a regular route, according to Metro’s website.

Expect longer waits for trains. Metro trains will run on a Saturday schedule. That will allow workers to clear snow and aim to provide reliable service once the storm passes, WMATA said in a news release Monday night.

MetroAccess service for people with disabilities is suspended until further notice.

Parking: Drivers are advised to move their cars off snow emergency routes to make way for plows. If your car is impounded, you’ll be charged $350, plus $20 each day the vehicle is stored. Snow emergency routes on the Hill include Constitution Avenue, Independence Avenue and H Street

Snowball Fight: An organized snowball fight is scheduled for 11 a.m. at Dupont Circle. Neighbors will meet for another in Lincoln Park at noon. Know of another? Let us know.