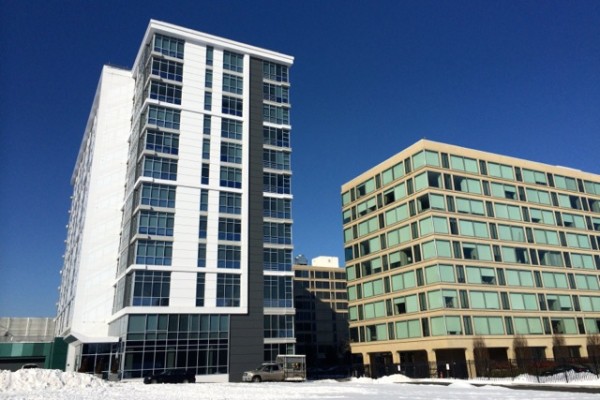 Update: Police said late Thursday, Feb. 19 that the man arrested Monday, Feb. 16 is suspected of firing a set of gunshots shortly after the separate set of shots that hit Sky House. The Sky House shooter was still on the loose as of Friday, Feb. 20, police said.

The windows of Sky House, on the northwest corner of 3rd and M streets SW, were hit by bullets Monday night, management said in an email to residents.

The shots were reported about 10 p.m. on the 200 block of K Street SW, police said. In the alley of that block, officers found a man standing with a black semi-automatic handgun at his feet. The suspect was arrested for carrying a pistol without a license.

No one was injured and no property damage resulted from the shots, police said. Hill Now couldn’t spot any damage to the building Tuesday afternoon.

JBG Companies, which own the building, is participating in the investigation, a company spokesman said.

Apartments in Sky House — which has a rooftop pool and “dog-washing boutique” — start at $1,625 for a studio and hit $3,400 for a 2-bedroom, 2 bath, according to the website for the building.

Overall crime is down in Police Service Area 105, which covers Southwest. The total number of crimes reported in the past year is 553, which is almost 5 percent lower than the 581 crimes reported the previous year, Metropolitan Police Department data shows.