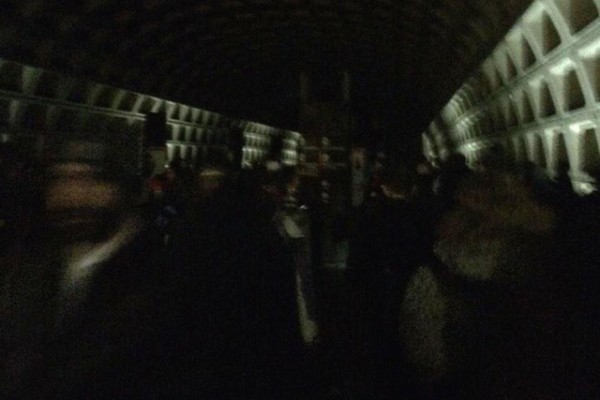 (Updated at 2:45 p.m.) A power outage in the L’Enfant Plaza Metro station had commuters trying to navigate in the dark during rush hour today.

The station entrance at 9th and D streets SW was closed for about five hours because of the outage, but the station remained open. Portable lighting was set up on the lower-level Blue, Orange and Silver line platform.

Riders began sharing photos of the darkened station about 8:45 a.m.

The power is out in half of L'Enfant Plaza. I feel like I'm getting on board Space Mountain, not the DC metro. pic.twitter.com/CM8oHNz6Kj

No power at L'Enfant Plaza metro station during rush hour. Customers having to use their phone lights to see. Get your act together, @WMATA.

meanwhile at L'Enfant Plaza. even the escalators and arrival board are off.

This is the blue/orange line platform at L'Enfant Plaza right now. Lights = off. #wmata pic.twitter.com/KaJNy1RbFQ

Power was restored and the station entrance at 9th and D streets SW was reopened by 1:45 p.m., Metro said in an update. Information on the cause of the outage was not immediately available.