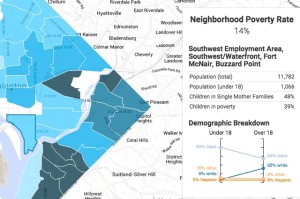 A third of children in Southwest are estimated to live in poverty.

Interactive maps released today by the nonprofit D.C. Action for Children show estimated poverty rates and math and reading proficiency rates for children in neighborhoods across the District.

About 20 percent of children under age 17 in the neighborhood designated as Capitol Hill/Lincoln Park live below the federal poverty line, according to the map made using 2009-2013 Census Bureau data. An estimated 16 percent of youth in the Union Station/Stanton Park/Kingman Park area live in poverty. The youth poverty rate in Near Southeast/Navy Yard was estimated at 8 percent.

The maps also show two “neighborhood child success indicators” — the percentage of students who scored as proficient or above in reading and in math, tabulated according to the neighborhood where they live.

The full data visualizations are available on the D.C. Action for Children website.

Image via D.C. Action for Children

more stories
Previous
Armed Robbery, Car Theft Reported on D Street NE
Next
You Can Ice Skate in Your Bathing Suit in Navy Yard This Week