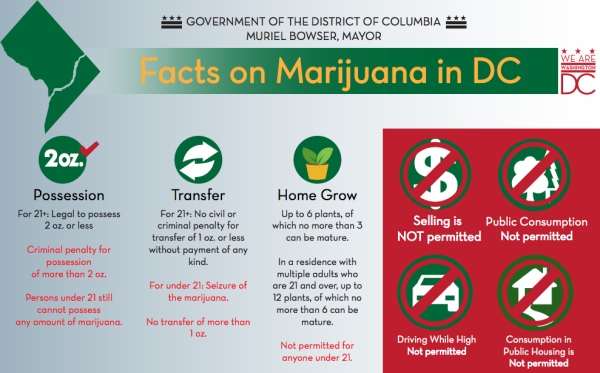 New voter-approved marijuana laws go into effect this week, and the city is working to make D.C. residents understand what will be allowed and what’s still illegal.

The implementation of Initiative 71 starting at 12:01 a.m. Thursday will make it legal for adults age 21 and older to:

“In November, residents of the District of Columbia voted to legalize small amounts of marijuana by adults for personal, in-home use in the District,” Mayor Muriel Bowser said in a statement. “We will uphold the letter and the spirit of the initiative that was passed last year, and we will establish the Initiative 71 Task Force to coordinate our enforcement, awareness and engagement efforts and address policy questions as they arise.”

Of particular interest to Hill residents is that it remains illegal to possess marijuana on federal land, which includes the National Mall, Lincoln Park, Seward Square, the park space around the Eastern Market Metro station and several plots of land in Navy Yard. The Washington Post mapped these areas.

D.C. will not “become like Amsterdam,” according to a question-and-answer sheet from the mayor’s office that stresses “home grow, home use.”

“Our law allows home use by adults 21 and over. Marijuana cafes are not permitted, and neither is the sale of any amount of marijuana,” the sheet says.

It remains a crime to:

Anyone convicted of smoking or consuming pot in public faces a $500 fine and up to 60 days jail time. Selling marijuana carries a $1,000 fine and six months jail time. And any business that lets patrons use pot could lose its license.