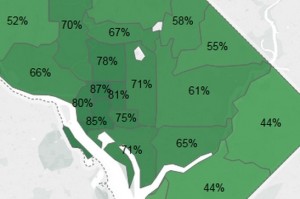 The share of tax-paying Capitol Hill households without children or spouses has spiked in the past decade.

Data released this week by the city says 61 percent of taxpayers in the 20002 zip code — which covers the northern portion of Capitol Hill, part of Hill East, the H St NE corridor and NoMa — are single and sans kids. This is a 14 percent increase from that portion of taxpayers in 2002.

A big caveat to the data is that it represents tax-paying households, not individual residents.

The data from the D.C. Office of the Chief Financial Officer is based on 2001 and 2012 tax returns, on which people listed where they lived in 2002 and 2013. Information released by that office last week showed 2013 household data alone.