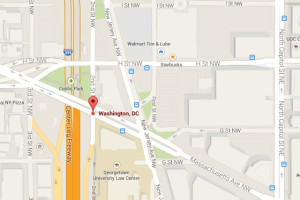 (Updated at 12:40 p.m.) Lane changes and ramp closures on I-395 start tonight to facilitate years of work on the Capitol Crossing development project.

The District Department of Transportation announced the first phase of traffic changes, which will mainly occur between 9 p.m. and 8 a.m. Northbound and southbound traffic between D Street and New York Avenue NW will be affected.

Here’s what drivers can expect, according to DDOT:

The I-395 southbound off-ramp to [3rd Street] will be closed permanently during this phase. There will be no vehicle parking on the ramp, and motorists should seek alternative routes.

The southbound travel lanes will be reduced to a single lane of traffic on a limited number of weekdays during off-peak hours, from 11 p.m. to 5 a.m.; and on certain weekends from midnight to 7 a.m.

The northbound travel lanes will be reduced to a single lane of traffic during off-peak hours from 9 p.m. to 5 a.m. for a limited number of weekdays; and on certain weekends from midnight to 8 a.m.

Construction of the Capitol Crossing mixed-use development is expected to affect traffic for four years, after a previous plan was scrapped to shut down part of the freeway to reduce the total work time.

Fines for speeding in work zones will be doubled. For more information on the work, see the dedicated Third Street Tunnel Project website.