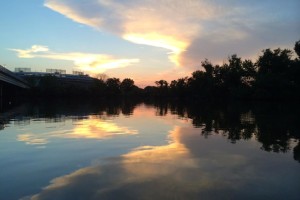 In an effort to promote natural resources and the soon-to-be-created 11th Street Bridge Park, park promoters will hold the first annual Anacostia River Festival this spring.

The event Sunday, April 12 will include free canoeing and kayaking, live music, a “bird of prey demonstration” and a bike parade, the 11th Street Bridge Park team announced.

The festival is a way to get people west of the river interested in recreation and educational options to the east, park director Scott Kratz said.

“We are so excited to be a part of this year’s National Cherry Blossom Festival and look forward to the positive exposure it will bring to East of the River neighborhoods, as well as the 11th Street Bridge Park,” he said in a statement.

Sponsors for the event scheduled from 12 to 4 p.m. April 12 include the Capitol Hill Arts Workshop and the National Park Service. It will be held in Anacostia Park, at Good Hope Road and Anacostia Drive SE, just on the other side of the bridge.

The redesign of the bridge, which aims to connect Ward 6 and Anacostia residents, will create a central plaza, environmental center and cafe.