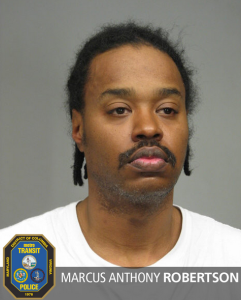 Marcus Anthony Robertson, 43, was arrested by Metro Transit Police Monday morning on charges he placed a parcel containing a “powdery substance” and a note in both stations, MTPD said last night.

The first of the packages was found about 7:45 a.m. Monday in the L’Enfant Plaza station. The parcel was checked by a K-9 unit and x-rayed by an explosives team and found to be harmless. Ten minutes later, a similar package was found and examined in the Gallery Place station, MTPD said.

Robertson was caught on surveillance cameras, spotted by officers and then arrested about 10:40 a.m. Monday.

Robertson confessed to having left the packages, according to MTPD. He’s charged with committing a felony hoax related to a biological weapon of mass destruction, and carrying a prohibited “ninja star.”

No information on his lawyer appears in online court records.