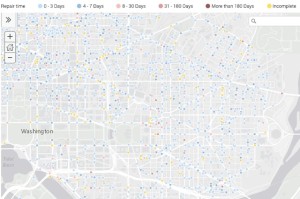 A new map by NBC Washington shows how quickly the District Department of Transportation repairs potholes.

While the data shows that most potholes in Ward 6 are repaired within days of being reported, craters in a few areas remained for longer.

A pothole on 3rd Street SW south of A Street SW went unfixed for more than 180 days, the map shows.

On Capitol Hill and in Hill East, sites of potholes with repair times of 31 to 180 days included 8th and A streets SE, South Carolina Avenue between 2nd and 3rd streets SE and 14th Street SE, south of Pennsylvania Avenue SE.

The numbers are pulled from a database of 311 calls for potholes from July 1, 2012 until last week, NBC said.

DDOT aims to fix nearly 40,000 potholes this year, with an official goal to fix them within 72 hours of when they are reported.

DDOT’s Reginald Arno told NBC they plan to tackle “395, 295, 695 first. And then we’ll go look at the New York Avenues, the Massachusetts Avenues, and then we go to the side streets from there.”

The full map is available on NBC Washington’s website.