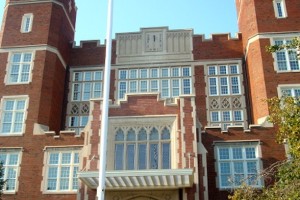 Middle schoolers east of the Anacostia River now have the option to attend the high school in Hill East.

Mayor Muriel Bowser announced a change to school boundaries today that will allow students of Kelly Miller Middle School in Deanwood to attend the school at 1700 E. Capitol St. NE.

Students at Miller previously were assigned to Woodson High School, which is also in Ward 7.

“Providing dual rights for rising 9th grade Kelly Miller students to Eastern HS and HD
Woodson HS may cause an increase in the enrollment at Eastern HS, which may result in fewer out of boundary students admitted to Eastern,” an official information sheet says.

Joe Weedon, the D.C. State Board of Education member-elect for Ward 6, said officials will have to take a closer look at Eastern’s capacity as enrollment at Hill middle schools increases, creating more demand for seats at the high school.

“As middle schools grow, we’re going to see more and more pressure on Eastern from a numbers standpoint,” Weedon said. “That could take five years, that could take 10 years.”

The middle schools that feed to Eastern now are Brown, Eliot-Hine, Jefferson and Stuart-Hobson.