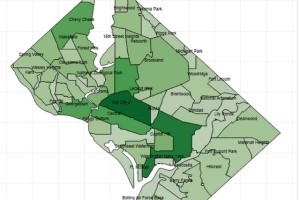 The total residential property assessment in Capitol Hill increased five-fold from 2000 to tax year 2016, according to estimates released last night by the D.C. Office of Revenue Analysis. The total assessment for the entire area designated as Capitol Hill was $556 million in 2000. The latest figure places that assessment at $3.339 billion.

The total increase for the District from 2000 to tax year 2016 was even higher, increasing about six-fold, according to the data. Much of this growth is attributable to the construction of new housing units.

The Southwest waterfront saw an even more drastic increase, of 766 percent. The total assessed property value in 2000 was just $198 million, the data shows. The latest figures place that value at $1.716 billion.

Neighborhood definitions were slightly different between 2000 and today, ORA said, but broad conclusions can still be drawn.

The full data is available on the District, Measured blog.

Image via Office of Revenue Analysis