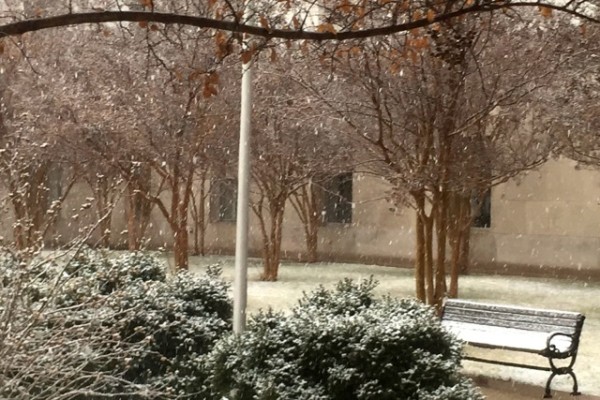 (Updated at 9:30 a.m.) Schools are closed, the storm has begun and many Hill residents have a whole snow day before them.

Sledding is still banned on the grounds of the Capitol building today, after Del. Eleanor Holmes Norton and others made a last-minute push for it to be allowed temporarily.

Frank Larkin, chairman of the Capitol Police Board said sledding on the Capitol grounds is still banned this week “for security reasons,” Washingtonian reported.

“According to recent media reports, at least 20,000 sledding injuries occur in the U.S. each year,” Larkin said in a statement. “For liability reasons, a growing number of U.S. cities are banning sledding on public property.”

Norton said she was “deeply disappointed” by the decision.”

“Because the Board did not enforce the sledding ban for many years, it is clearly within its power not to enforce it again during a four-day period,” she said in a statement.

D.C. public schools, D.C. government offices and federal offices are all closed, but Frager’s Hardware, Eastern Market and many Hill restaurants and bars are open.

School is closed but the cafe is open!! Come see Brittany and stock up on treats before the storm hits! http://t.co/730k1Kl26O

It's official @ArgonautDC — owned & operated by neighborhood residents — will be open as scheduled today for brunch at 10 am.

We're open everywhere. MidCity is closing at 3pm. Eastern Market and @UnionMarketDC should be fine as PM staff are super local.

SNOW DAY for the Metro Mutts shops today. Sorry for any inconvenience. Have fun & be safe!

We're going to go ahead and close today, since the majority of programming has been cancelled and we're looking at some big snowflakes!

Tow trucks are removing cars from snow emergency routes — for hefty fines. If your car is parked on any streets shown on this map, move it ASAP.

The latest forecast for the 20002 ZIP code says 3 to 7 inches of accumulated snow are possible today, with winds up to 10 mph. There’s only a 30 percent chance of precipitation tonight, according to the National Weather Service.

more stories
Previous
Capitol Hill Real Estate: How Long on the Market Is Too Long?
Next
Morning Rundown