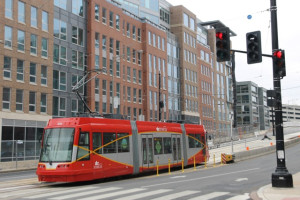 (Updated at 4:05 p.m.) As empty streetcars glide back and forth on H Street, scrapping the entire project is not out of the question.

The head of the District Department of Transportation will abandon the H Street streetcar project if additional reviews reveal “fatal flaws,” he said at a D.C. Council hearing this afternoon.

“You need to have the facts on your side and make a business case for what you’re doing,” DDOT Acting Director Leif Dormsjo said. “I’m not going to ask for money from the citizens of this jurisdiction, nor from this council, for something I can’t manage. That is the threshold test that’s going on as we speak.”

Dormsjo said his preference is for the streetcar project to succeed.

“My bias is toward delivering transportation solutions and services that make this city a better place,” he said.

Ideally, Dormsjo would like the H Street/Benning Road tracks to be the “starter line” of an extended system, he said.

“It’s certainly not the optimal streetcar facility that you would want if you were going to open up a facility fro point A to point B,” he said. “It wouldn’t logically be the endgame.”

Additionally, he said the cause of a “flash fire” atop a streetcar on Feb. 21 is still under investigation.

The overall safety and success of the system is being evaluated now by the Federal Transit Administration, American Public Transportation Association and State Safety Oversight Office within the D.C. fire department.

Dormsjo told Council members he would have a better idea of next steps for the streetcar project before budget preparations next month.

The future of the streetcar must be determined by “the facts on the ground,” he said.