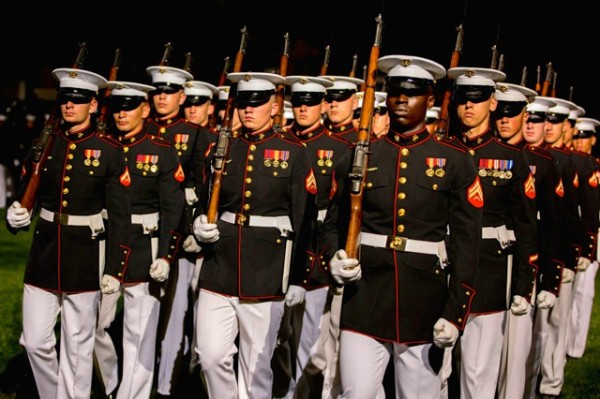 The sound of bugles and drums will return soon to Barracks Row on Friday nights.

Friday evening parades by the Silent Drill Platoon, Marine Corps Band, and Drum and Bugle Corps will begin May 1, the Corps announced. The performances will be held at the Marine Barracks every Friday at 8:45 p.m. through Aug. 28. Bookings for the free seats are already rolling in, Capt. Diann Rosenfeld said.

“The parades are booked every single evening,” she said.

Marchers in the parade began practicing last week, and members of the Drum and Bugle Corps and the Silent Drill Platoon prepare and perform year-round. Rosenfeld said she never fails to be impressed by the silent performers.

“I’m always in awe of the Marines’ precision and skill when they are on the parade deck,” she said.

More than 200 Marines hand-selected for their performance units will participate in the parades, which each run about an hour-and-a-half. More than 3,500 people attend every Friday night.

Parade reservations can be made on the Marines’ website.

more stories
Previous
Share of Low-Income Households on Capitol Hill Has Dropped
Next
After Shortage, Mussels Return to Granville Moore’s This Week