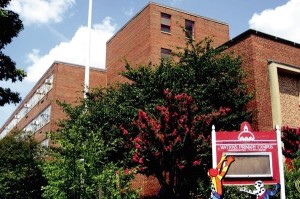 Watkins Elementary School parents are fighting for funds to modernize the Hill East building, after Mayor Muriel Bowser moved to axe nearly $7.3 million from its 2015 budget earlier this year.

The 420 12th St. SE school and recreation center needs more than $27 million for long-delayed upgrades, the parents wrote in a letter to Bowser and other D.C. officials. Parent representatives of the Watkins School Improvement Team are encouraging supporters to sign the letter by Saturday.

Funding of $12.8 million in fiscal 2016 and $15.5 million in fiscal 2017 is “absolutely critical” for Watkins, which was built in 1963, the letter says. Out of the school’s 10 major building systems, eight are “poor” or “unsatisfactory,” according to a 2008 D.C. Public Schools master facilities plan. The recreation center is “aged” and hasn’t received “any substantial improvements,” the letter adds.

“While we heard significant support from several members of the Council during recent agency oversight hearings, we want the mayor to hear from us directly,” the parent representatives of the Watkins School Improvement Team wrote in a post to their website. “We believe this letter is the most efficient way to provide a focused message while demonstrating the broad support that Watkins has across our community and neighborhood.”

Plans for Watkins could include an “open and inviting welcome center,” a greenhouse and a fitness room, according to a slideshow from architecture firm Perkins Eastman.

In fiscal 2015, the city plans to make repairs to the school’s heating system and windows, but will postpone any construction, with planning and design completed this year.

“This approach will allow sufficient time to respond to and design for all stakeholders, while also allowing for much needed repairs such as window replacement,” the parents’ letter says. “While we view this approach favorably, we are aware of the risks associated with deferring funding for future years, which would further delay critical improvements to education spaces.”

Watkins had 545 students from across the District in the 2013-2014 school year, according to DCPS. The school also hosts the Watkins Hornets football teem, after-school programming and free summer meals for children.