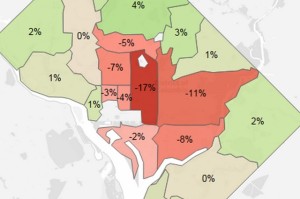 (Updated at 5:40 p.m.) Low-income households accounted for a smaller portion of Capitol Hill in 2013 than they did a decade earlier.

New data from the D.C. Office of Revenue Analysis shows how the economic makeup of the District shifted from 2002 to 2013, according to income tax filings.

The data takes into account households of at least two people with income under $40,000 annually, and childless, single-tax fliers who made less than $20,000 annually. The amounts used are 2014 dollars.

In general, the percentage of low-income households climbed in neighborhoods in the outer reaches of the District and dropped closer to downtown.

A full third of tax-paying households in 20002 — which covers the northern portion of Capitol Hill, part of Hill East, the H St NE corridor and NoMa — were classified as having low incomes in 2013, the data shows. That share of the population was 11 percent lower in 2013 than it was in 2002. And a quarter of tax-payers in the 20024 ZIP code were classified as low-income in 2013, which is down 2 percent from 2002.

Ward 6 ZIP codes saw increases in the estimated number of low-income singles from 2002 to 2013, but decreases in the number of low-income families, the ORA data shows. This likely accounts for “students and recent college graduates who have high earning potential but currently don’t make much money,” the District, Measured data blog writer guessed.

The numbers exclude people who filed taxes as married but on separate returns, which accounts for about 3 percent of all local income tax filers.

Correction: We fixed a math error in the initial version of this story.