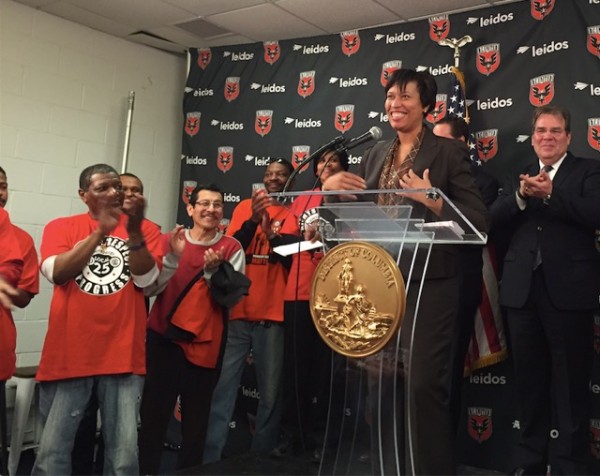 The Major League Soccer franchise will need 800 full-time and part-time workers to construct and staff the Southwest stadium, Bowser said.

At a news conference this morning, Bowser praised a labor agreement D.C. United struck with UNITE HERE Local 25, the union that represents hotel and food service workers in the District. The deal announced today lets hospitality workers at the stadium join the union and create contracts with the team. In return, the union agreed not to strike or picket at the stadium.

“We’ve come a long way,” Bowser said. “When this project is done right, we know it can be a game changer for the District of Columbia.”

The D.C. Council signed off in December on the construction of the stadium, which will hold 20,000 to 25,000 spectators. Financed by the District and the soccer team, the facility is slated to open in 2017.

John Boardman, the union’s executive secretary and treasurer, thanked D.C. United for helping bring what he called “good wages” and “family-sustaining benefits.” Specific information on wages and the share of full-time and part-time jobs was not immediately available.

“Today is the culmination of what happens when good, thoughtful, comprehensive economic development occurs,” Boardman said.

Tom Hunt, the franchise’s chief operating officer, said he was excited about the jobs his team will create.

“We are deeply committed to the District of Columbia’s larger union community,” he said. “We are very appreciative of their tireless support in helping bring a soccer stadium to this great city.”

more stories
Previous
Free Ride Service for Women, LGBT People Is Expanding in Ward 6
Next
Hill Pets of the Week: Basil and Moo