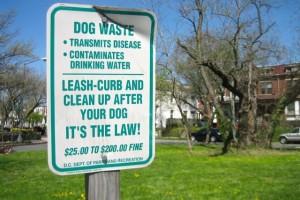 A fight that lit up a neighborhood email list on Capitol Hill is heating up again.

Residents are trying to identify a serial “trespooper” spotted leaving his dog’s waste on sidewalks and at curbs in Hill East.

“I find this irresponsible behavior especially infuriating,” a resident who identified himself as living near 17th and A streets SE wrote. “If the trespooper is on this listserv, I strongly urge you to stop leaving your dog waste outside our house. It’s as unsanitary as it is unsightly.”

Locals griped on the Hill East listserv in March about dog owners not cleaning up after their pets or throwing dog poop bags in their neighbors’ trash, as Washington City Paper chronicled. The fight briefly resurfaced in November.

Anyone caught leaving behind dog waste in public can be fined $150 to $2,000, as DCist reported.