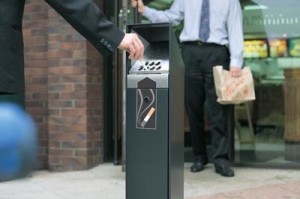 Smokers will soon have fewer excuses for throwing their cigarette butts on the ground.

The Capitol Hill Business Improvement District plans to install special containers to collect butts near bars and restaurants on Pennsylvania Avenue SE and along Barracks Row. Next month, the 300 block of Pennsylvania Ave. SE and the 700 block of 8th Street SE will each have two of the receptacles, known as Ashguards.

The fire-safe metal containers, which each cost about $260, hold hundreds of cigarettes in their one-gallon tanks. To buy the Ashguards, the BID is using a $2,500 grant from the Cigarette Litter Prevention Program of Keep America Beautiful, a nonprofit organization that fights for cleaner cities. After the BID purchases the receptacles, any remaining grant money will go toward a public service announcement that discourages cigarette littering.

“It just seemed like those units would make the most sense because they target high-smoking areas,” BID spokeswoman Kelly Maslar said.

The BID will canvass the blocks set to get the Ashguards and count every cigarette butt on the ground. Then, they’ll count again this summer to see if cigarette litter has dropped.

The BID has received six previous grants for the outdoor ashtrays since 2009. The organization previously used grant money to install ash tray lids on garbage cans near the Potomac Avenue Metro station. The number of cigarette butts littering the area decreased by 38 percent last year after the lids had been in place for three months, the BID estimated.

“We could definitely continue to grow the program,” Maslar said.

Anacostia Riverkeeper, a group that works to protect the waterway, also received a Cigarette Litter Prevention Program grant this year. But it wasn’t immediately clear how the organization based in Navy Yard will use the money.

A representative of Anacostia Riverkeeper wasn’t immediately available to comment.