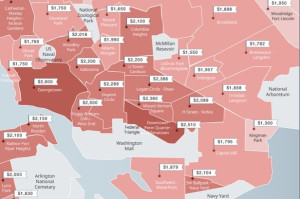 The District had the country’s fourth costliest rentals in the country last month, with Navy Yard among the top 10 most expensive rental markets in D.C.

The neighborhood categorized as “Southwest Ballpark – Navy Yard” had a median rent of $2,104 per month for a one-bedroom apartment in February, making it the ninth costliest neighborhood for rentals in D.C., according to a new report from rental website Zumper. The estimated rent there was $104 more than the city-wide median of $2,000.

At $2,600, Georgetown has the highest median rent for one-bedroom apartments in D.C., the report by the San Francisco-based startup says. Woodridge-Fort Lincoln has the lowest, at $1,050. Overall, only Boston, New York and San Francisco have higher rents than the District.

The report came a day before the D.C. Fiscal Policy Institute released a study that shows almost half of the District’s affordable housing disappeared between 2002 and 2013. The supply of apartments that cost less than $800 per month dropped from 60,000 in 2002 to just 33,000 in 2013.

“The loss of affordable housing threatens the physical and mental health of families, makes it harder for adults to find and keep a job, creates instability for children, [making] it hard to focus at school, and leaves thousands at risk of homelessness at any given moment,” DCFPI policy analyst Wes Rivers wrote in the study.