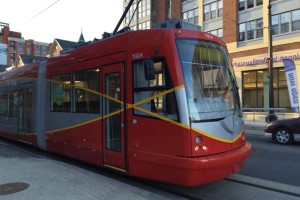 (Updated at 5:05 p.m.) An ANC that covers the H Street NE corridor is urging Mayor Muriel Bowser to get the streetcar up and running and expand the system to avoid creating a “useless” service.

ANC 6A unanimously voted last night to send a letter to Bowser asking her to save the project. Killing the project would undercut development along H Street, the ANC said.

“Given the considerable investment the District has already made in establishing the H Street/Benning Road line and the tremendous revitalization our neighborhood has experienced, we are extremely disappointed if there are plans to abandon this commitment,” the ANC said in an initial version of the letter.

“The streetcar project has spurred a good deal of excitement along the H Street corridor and has given our community hope that the city is committed to initiatives that promote economic development and enhanced public transit options for our long-neglected part of the city.”

The ANC opted to change some of the letter’s language before sending it to Bowser. The spirit of the final letter is consistent with the initial version. But the group opted to say an H Street streetcar line on its own was of “limited use,” rather than “useless.”

The group said it would like to see streetcars carrying passengers down H Street soon, and an eventual extension of the 2.2-mile line to Georgetown and the Minnesota Avenue or Benning Road Metro stations.

Others also are expressing frustration with the possibility of killing the project. As Hill Now reported, The Coalition for Smarter Growth has launched an email campaign encouraging residents to tell Bowser “do everything she can to make our H Street/Benning streetcar investment work.”

In a Hill Now poll on whether to kill the streetcar, 65 percent of respondents said as of this morning that they think the District should carry on with the project. Local business owners, including Scott Magnuson of The Argonaut, have backed that position.

“Seeing the streetcars go up and down the corridor with no passengers has been extremely frustrating for our community,” the ANC said in its letter. “We hope that at the very least there is a concerted effort to resolve any testing issues quickly and gain the necessary approvals to begin passenger service as soon as possible.”