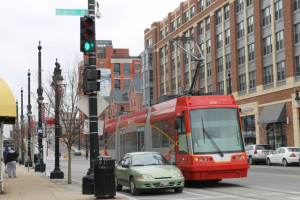 (Updated at 1 p.m.) Councilman Charles Allen of Ward 6 is urging locals to weigh in on the beleaguered D.C. transportation project that would bring streetcar service to H Street NE.

Allen has created a webpage for residents to give him feedback on the project, which the District might scrap. The councilman said he is fighting to get passengers on the streetcars to encourage further growth along the H Street corridor.

H Street has added 100 business and more than 1,000 jobs since the District started installing streetcar tracks in 2009, Allen said.

“To be sure, I want the DC Streetcar to be safe, reliable, and efficient,” Allen said on his streetcar webpage. “But I believe that the streetcar can be one of the ways the District better connects its neighborhoods and encourages growth in our communities.”

More than 175 people have responded to Allen, many of them with concerns.

John Wirt told the councilman on the webpage that the streetcar must go from H Street to Georgetown “for it to be worth anything at all.”

The Coalition for Smarter Growth and ANC 6A both are trying to encourage Mayor Muriel Bowser to save the project. In a Hill Now poll on whether to kill the streetcar, 66 percent of respondents said as of this afternoon that they think the District should carry on with the project.

“In making the investment in streetcar, the District has asked a lot of the small businesses on H Street, the surrounding neighborhood, and the residents,” Allen said on his webpage. “I expect the new DDOT Director to take a clear look at the project to support what’s working, identify what’s not, and develop a plan to move the H Street line forward — connecting it downtown and to neighborhoods to the east.”