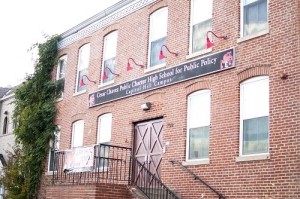 New data from the city shows how many local high school students got their cap and gown last summer.

The Capitol Hill campus of Cesar Chavez Public Charter Schools for Public Policy had the highest graduation rate of any high school in Ward 6 where administrators reported stats to the D.C. Office of the State Superintendent of Education.

The school at 709 12th Street SE saw 66 percent of its students graduate in 2014, according to a report by the D.C. Office of Revenue Analysis.

Of the 31 schools that reported data on their graduation rates, 17 schools gave a greater percentage of their students diplomas than Cesar Chavez did. The school had 380 students in the 2013-2014 school year.

Overall high school graduation rates for charter schools across the District fell to 68.9 percent in 2014, from 75.6 percent the previous year, WAMU reported.