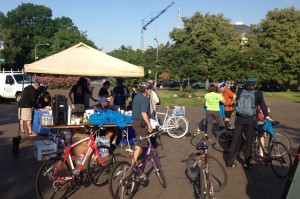 (Updated at 5 p.m. on March 23) Veteran bike commuters and those who want to start pedaling to work will get VIP treatment in Ward 6 for Bike to Work Day.

Riders will be able to grab free food, drinks and T-shirts, rain or shine, at the Eastern Market Metro Plaza, Canal Park in Navy Yard and at 1150 First St. NE in NoMa. The event Friday, May 15 is free, but shirts only are available to the first 14,000 people who register online.

The event is intended to encourage bike commuting, which is easier than driving or taking public transportation for many Capitol Hill residents, said Colin Browne, spokesman for the Washington Area Bicyclist Association, a lead sponsor of the event. He cut his own commuting time from 30 minutes to just 9 minutes when he began to bike from his Capitol Hill home to a previous job near 2nd and C streets NE.

“It was certainly the fastest way to get around the Hill,” Browne said.

About 300 people stopped by the Eastern Market pit stop last year, said Kelly Maslar, a spokeswoman for the Capitol Hill Business Improvement District, which has run the stopover since 2011.

Last year, the pit stop had granola bars and bananas from Harris Teeter, coffee from Peregrine Espresso and bike experts on hand from Capitol Hill Bikes. Workers from the bike shop will be at the pit stop again this year, and the Capitol Hill BID still is trying to confirm other sponsors, Maslar said.

The NoMa pit stop also will have breakfast food and local bicycle experts, said Rachel Davis, spokeswoman for the NoMa Business Improvement District, which has had the stopover since 2011. NoMa BID is hoping for more than 500 bicyclists to visit its pit stop, she said.

A representative of the Capitol Riverfront Business Improvement District, which is running the third pit stop, wasn’t immediately available to comment.