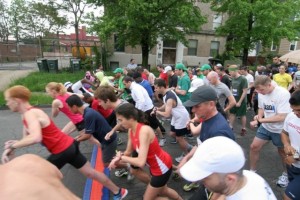 Hundreds of runners will speed through NoMa soon as part of the Metropolitan Branch Trail 5K.

Registration recently opened for the race, which is set for Saturday, May 2.

“The race is a means to showcase a new and actively used recreational amenity — and commuter pathway — that links the historic Brookland and Edgewood neighborhoods, and others that are adjacent, to NoMa, Union Station and beyond,” she said by email.

Runners will start at the Rhode Island Avenue Metro station, head south, turn around between L and M streets NE and return to the Metro station.

Registration available online costs $25 for adults and is free for up to 150 youth under age 18.