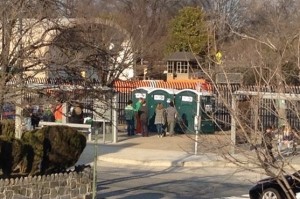 (Updated at 4 p.m. on March 24) Hill East residents were happily surprised to find that ShamrockFest did not disrupt the neighborhood this weekend — and the D.C. events authority said today locals can expect more of the same.

Events D.C. is committed to “doing everything in our power” during future events to mitigate litter, public urination or other problems that drew locals’ complaints after the Rock ‘n’ Roll D.C. Marathon, spokesman Peter Kirschner told Hill Now.

“We had a good day of celebration,” Kirschner said.

After neighbors told D.C. officials that large-scale events were bringing public urination, heaps of trash and disruptive crowds to Hill East, some locals said they were pleased to find that ShamrockFest was no problem. The event, which drew about 12,500 attendees, featured Blues Traveler, Gaelic Storm and other bands from 3 to 11 p.m. Saturday.

ANC 6B Commissioner Denise Krepp said she was “very impressed” with Events D.C., which met with locals in advance of the event. Krepp said she didn’t spot people urinating in the alley behind her home near 18th and A streets SE, as she and her husband, Tim Krepp, did in the past. But she did see city workers constantly picking up trash in her neighborhood.

“This is the new baseline,” she said. “This is what we expect now.”