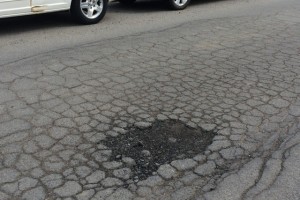 Potholes on and around Capitol Hill could disappear this week as part of a D.C. campaign to repair damaged roads.

The District will launch “Potholepalooza” tomorrow, describing the initiative as a 48-hour “war on potholes.” City workers will “aggressively” mend potholed streets throughout D.C. during the campaign, Mayor Muriel Bowser’s office announced.

Dozens of potholes in Ward 6 need the attention of city workers, according to the District Department of Transportation’s pothole repair website. Residents can report potholes online or by calling 311.

DDOT tries to repair a pothole within three business days of receiving a report about one, the website says. The agency has filled almost 7,300 potholes in the past two weeks, according to the mayor’s office.