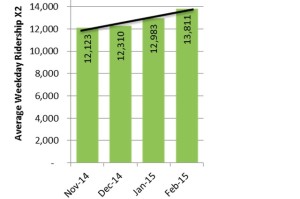 More and more people are riding the X2 bus.

Ridership on the X2 Metrobus line, which travels the Benning Road/H Street NE corridor, jumped an estimated 14 percent between October and February, according to data released this week by Metro.

An average of 13,800 people rode the bus every weekday in February, up from 12,700 people in October, the data shows. Metro attributed the spike in ridership to improvements they made in December, including increasing the frequency of buses to every 8 minutes from 6 a.m. to 7 p.m. on weekdays, and keeping buses evenly spaced.

“Overcrowding (particularly during the midday) has been virtually eliminated, and on-time performance has grown to 83% — a remarkable achievement for a heavily congested urban corridor,” a post to the PlanItMetro blog says.