(Updated at 9:55 a.m. Monday) The owners of Bardo Brewpub on Bladensburg Road want to turn unused land in Navy Yard into a “deluxe” waterfront beer garden with food trucks, a dog park and outdoor movies.

In a three-minute video narrated by their mascot Bardawg, Bardo announced last night that they’re aiming to raise $200,00 in the next month to create a “BeerDisneyLand” at 25 Potomac Ave. SE, just south of Nationals Park. 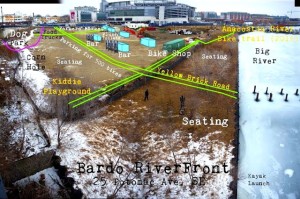 Donors to Bardo’s Indiegogo campaign will receive Groupon-style discounts on beer once the business opens. For $20, a donor will receive four pints of beer. For $1,000, donors get “a hunnert pitchers of beer” for a party at the beer garden.

Representatives from Bardo presented the initial concept to ANC 6D earlier this month, as JDLand reported. The business was pitched as an interim use on an MRP Realty development site.

Bardo could operate on the lot for a minimum of five years, owner Andrew Stewart said in an update.