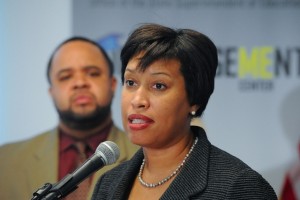 (Updated at 9:05 a.m.) The H Street/Benning Road streetcar line won’t only be finished, it will be extended, Mayor Muriel Bowser said last night.

Delivering the State of the District address, Bowser pledged to start streetcar service on the H Street line and then expand the system to run all the way from Georgetown to downtown Ward 7, east of the Anacostia River.

Here’s what she said in the remarks, as prepared for delivery:

“We all know that the Streetcar has been long on promises but short on results. That changes now.

I promise you that we will get the Street Car along H Street and Benning Road line up and running.

Then we will extend the line to downtown Ward 7 so that Councilmember Alexander’s constituents along Benning Road can ride to Union Station and eventually all the way to Georgetown.”

Bowser didn’t say when streetcars will pick up passengers on H Street or other parts of D.C. Also, she did not specify the eastern end point of the planned line. Officials have previously shown plans that would bring streetcar service to the Minnesota Avenue or Benning Road Metro stations.

The future of the streetcar was up in the air less than a month ago, when DDOT’s acting director Leif Dormsjo left open the possibility of killing the entire project if additional reviews revealed fatal flaws.

Plans for the streetcar network have been scaled back since initial designs called for the creation of 37 miles of tracks.