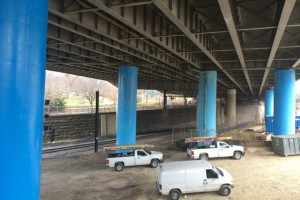 Reconstruction of the Virginia Avenue SE train tunnel will continue.

In a decision issued today, a federal judge in D.C. refused to grant an injunction to a city watchdog group trying to stop work on the CSX railroad tunnel.

The Committee of the 100 on the Federal City filed an application in November asking the court for a preliminary injunction banning the District Department of Transportation from issuing permits for the project.

U.S. District Judge Christopher R. Cooper ruled today that the Committee did not prove the worthiness of their request. “Nor has it shown that the potential environmental harm of reconstruction outweighs the public benefit from modernizing the tunnel,” his opinion said.

Cooper wrote in the 46-page court filing that the Committee did not prove that reconstruction of the 111-year-old tunnel would cause “certain and great” injury because of noise, vibrations, air pollutants or the risk of a rail accident. Here’s an excerpt from the document:

… the Committee’s contentions that a new tunnel will lead to more accidents and a greater risk of terrorist attack are speculative at best. And with the exception of the removal of some 200 trees, the Committee has not established that any environmental effects of the construction activity will be severe or irreparable.

Moreover, although the construction inevitably will be disruptive and unsightly, the Committee has identified only one of its members who will be directly affected. This is not to minimize Ms. [Maureen Cohen] Harrington’s understandable misgivings over the prospect of a large-scale construction project outside her front window in the coming years. But her concerns do not outweigh the broader public’s substantial interest in modernizing this deteriorating and outmoded tunnel.

The $170 million CSX project will enlarge and reconstruct the aging freight tunnel that runs beneath Virginia Avenue SE from 2nd to 11th streets. The work will eliminate a bottleneck that delays freight and passenger travel.

ANC 6B commissioners said late last year that they support the advancement of the work.