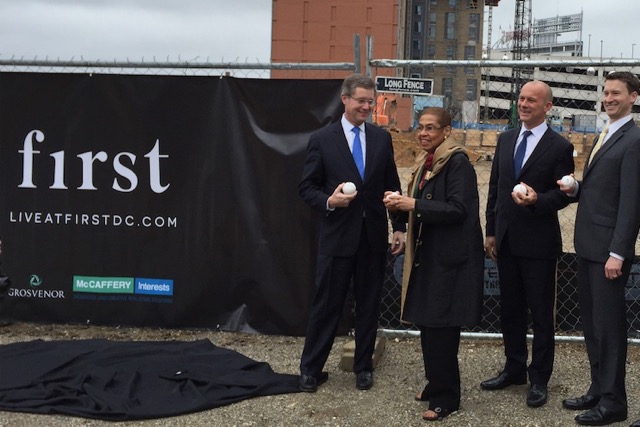 A Chop’t, Taylor Gourmet and a 170-room Marriott Residence Inn are headed to a new development near Nationals Park as early as next year.

F1RST, informally known as “Ballpark Square,” will feature 450,000 square feet of mixed-use space at 1st and M streets SE. The businesses are expected to open in late 2016 or early 2017.

The property also will include a 325-unit apartment complex with a gym, pool and rooftop view of the stadium, developers said today during a news conference unveiling F1RST. Of the development’s 450,000 square feet, 300,000 is for residential use.

James Patillo, chief development officer of Grosvenor Americas, said his company is excited about developing the property in Navy Yard.

“It’s already a highly desirable, high amenity area,” Patillo said. “Once we’re complete with these buildings, it will be a much more dynamic and vibrant area.”

Details about Chop’t and Taylor Gourmet first emerged in February on JDLand. But developers hadn’t officially announced the future F1RST tenants until today.

Del. Eleanor Holmes Norton, who joined Ward 6 Councilman Charles Allen and his predecessor, Tommy Wells, at the news conference, said the development is the “highest and best use” of the federal land where F1RST will stand.

“It’s a win-win for the federal government and the District of Columbia,” Norton said.