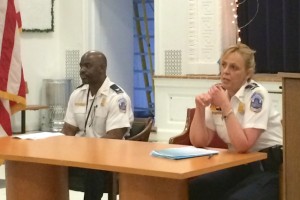 (Updated at 4:20 p.m.) The number of robberies reported on Capitol Hill is up, so the First District is putting more officers on the street.

Police are cracking down on a surge in robberies that falls mostly within Police Service Area 107, First District Cmdr. Jeff Brown said at a community meeting last night.

Between about 5:30 p.m. and 2 a.m. daily, 12 officers are on patrol in the area bordered by 6th Street NE, E Street NE, 14th Street NE and G Street SE. When statistics show that crime in that area is particularly high, as many as 24 officers will patrol the targeted zone, Brown said.

“I hope we will continue to see a downward trend here,” he said. “I was looking at the maps, and they do look pretty good.”

Thirteen robberies, including those in which a gun was used, were committed in PSA 107 in the past 60 days. Eight robberies occurred in the previous 60-day period, police statistics show.