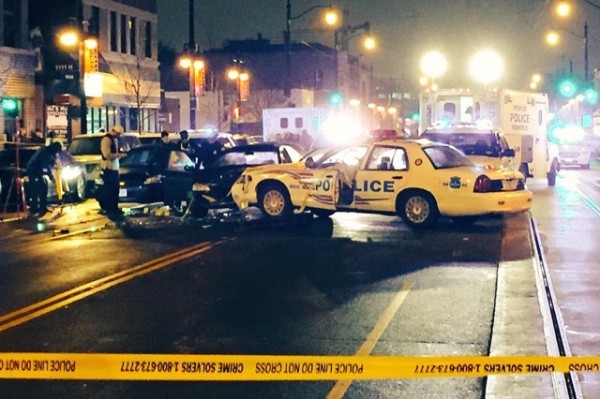 (Updated at 12:50 p.m. Friday) A man suspected of fatally shooting a Census Bureau guard fired at police on H Street NE Friday night and was shot by officers, police said.

After a police chase that began east of the Anacostia River, a man exchanged fire with an officer on the 1100 block of H Street NE, police said. The gunman was shot in the head and a Metropolitan Police Department officer was wounded in the leg, WJLA reported.

The block where the shooting occurred was still closed to traffic until about 9:30 a.m. Drivers could not pass on H Street NE between 10th and 11th streets NE, and buses were taking detours around the closed block.

The suspected shooter has been identified as Ronald Anderson, a 48-year-old from Southeast D.C., police said in an update early Friday afternoon. He has been charged with kidnapping while armed and assault on a police officer while armed.

The deadly incident began about 5:30 p.m. at 3rd and T streets NE, when an armed man forced a woman into a car, police said. The man fled with the kidnapping victim in a green Honda Accord and was seen arguing outside a gate of the Census Bureau campus in Suitland, Maryland, The Washington Post reported.

The suspect’s car was spotted about 7:35 p.m. in Ward 7, in Woodland Terrace, police said. When police pursued the car, the man shot at officers on the 2700 block of Bruce Place SE and again on the 1200 block of 3rd Street NE, police said.

The chase continued onto the 1100 block of H Street NE, where officers tried to block the driver’s path. The driver crashed into a patrol car, and a gunfight between the suspect and police broke out on the busy H Street corridor, with pedestrians and restaurant patrons reportedly ducking for cover.

A D.C. police sergeant was hit in the leg, the suspect was conscious and the female passenger in the car was OK, Police Chief Cathy Lanier told the Post.

Anderson was scheduled to appear in court today in Prince George’s County on an assault charge, according to the Post. It was not immediately clear if that court case is related to the incident yesterday, which fell on Anderson’s 48th birthday.

The shooting was not terrorism-related, an FBI spokeswoman told the Associated Press.

“We believe this was domestic-related,” Lanier said, according to the AP.

This marks the first time we've asked customers to hit the floor.

saw smoke from gun shots fired right outside the shop. never been told to get on the floor before. we'll be here for a while. #hstreetne

We’ll have more information throughout the day.

The investigation remains ongoing. Anyone who has information regarding this case is asked to call police at 202-727-9099. Information can also be submitted to the MPD’s text tip line by text messaging 50411.