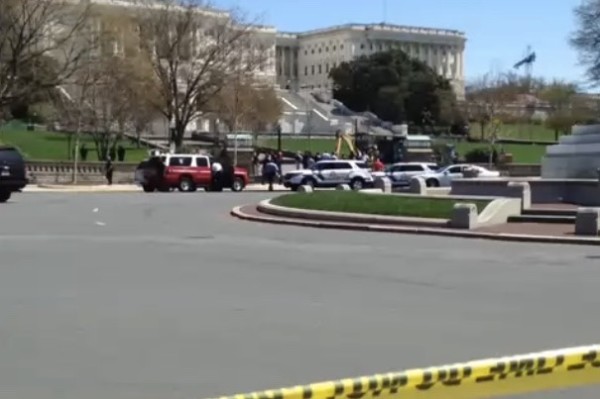 (Updated at 8:45 p.m.) The U.S. Capitol was locked down for about two hours today after a person shot and killed himself on the Capitol’s grounds, police said.

Shots were fired on the U.S. Capitol’s West Front just after 1 p.m. and, shortly thereafter, the shooter was said to be “neutralized,” according to U.S. Capitol Police. Authorities are investigating the incident as a suicide.

The lockdown was lifted about 3:45 p.m., but portions of Maryland Avenue, Pennsylvania Avenue and 1st Street around the U.S. Capitol remained closed as police conducted a suspicious package investigation connected to the shooting.

At approximately 1:05 pm on Saturday, April 11, 2015, a male subject walking in a public area near First Street and Pennsylvania Avenue, NW, walked towards the Lower West Terrace of the U.S. Capitol Building. The man had a backpack and a rolling suitcase. The man did not engage in any contact with the U.S. Capitol Police as he walked to the Lower West Terrace, where the self-inflicted gunshot occurred. The man who turned the gun on himself was the only shooter involved. No other injuries were reported. The identity of the man is being withheld pending further investigation and notification of next of kin.

On Twitter, witnesses described the shooter as a young man who was protesting outside the Capitol.

Just saw a young man fall down shot at the Capitol building . Not sure if he shot himself or was shot! Place is shut down!

He held up a sign that said tax the other 1/4 or something like that. Just before he fell down.