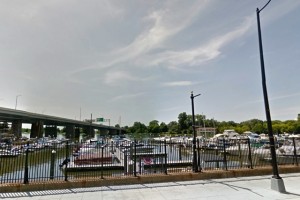 A man who was found dead this weekend near the Maine Avenue Fish Market remains unidentified and police are seeking the public’s help, the Metropolitan Police Department said yesterday evening.

Authorities have asked the public to help identify the man discovered in the water near the 1300 block of Maine Avenue SW Saturday afternoon. The man was 30 to 50 years old and was found with a laminated business card around his neck that said “Fuzz W.S. Fuzzy Shoe Shine Doctor,” police said.

Police haven’t said how the man died. But the MPD’s homicide division is investigating his death.

Police found the man just after 3 p.m. Saturday during the peak bloom period for cherry blossom trees along the Tidal Basin.

Anyone with information about this case is asked to call the Metropolitan Police Department at (202) 727-9099.  Additionally anonymous information may also be forwarded to the department’s TEXT TIP LINE by text messaging 50411.