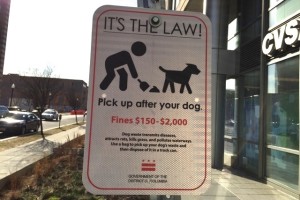 Hill East residents may get an official reminder that their dogs’ business is their business, too.

ANC 6B is set to consider a request that the District install a sign reminding locals to pick up their dog waste. The sign would stand on the unit block of 18th Street SE, an area locals have said is plagued by a serial “trespooper,” who lets his dog relieve himself on sidewalks, curbs and lawns and then doesn’t pick it up.

Denise Krepp, an ANC 6B commissioner, said several of her Hill East neighbors are frustrated with dog owners who don’t pick up after their pooches. Krepp has a resolution before the commission that calls for the sign, noting that “dog waste kills grass; can contain 23 million fecal coliform bacteria; can harbor bacteria, viruses, and parasites; and attracts rats.”

“It’s my first resolution, and it’s about dog poop,” said Krepp, who became a commissioner in January. “I can’t wait.”

It’s unclear, however, when, or if, a sign will arrive. The District currently doesn’t have money in its budget for dog waste removal signs, Krepp said.

Last month, a neighborhood email list lit up with talk about the “trespooper” spotted leaving behind his dog’s waste.

“I find this irresponsible behavior especially infuriating,” wrote a resident who identified himself as living near 17th and A streets SE. “If the trespooper is on this listserv, I strongly urge you to stop leaving your dog waste outside our house. It’s as unsanitary as it is unsightly.”

more stories
Previous
Two Rivers Public Charter School in Near Northeast Tops Wait List Rankings
Next
Do You Have Time to be a Landlord in D.C.?