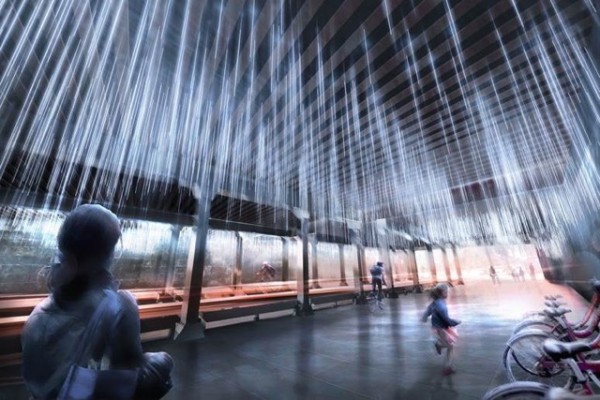 The M Street NE underpass in NoMa will get a little brighter with the help of some light designed to resemble rain, the NoMa Parks Foundation announced today.

The passageway under the train tracks will have “countless points of light raining down from its ceiling” as part of an art project for the space, according to the foundation. The installation, known as “Rain,” will get its shower effect from light-emitting diode (LED) lights inside hundreds of polycarbonate tubes.

The project still is in the design phase, but construction is expected to start this fall.

“This is the first of four exciting transformations planned for NoMa’s underpasses,” Charles Wilkes, chairman of the NoMa Parks Foundation, said in a statement. “The goal is to turn what is now dark and somewhat foreboding into beautiful and inviting spaces.”

Representatives of Thurlow Small Architecture and NIO architects, which will design the installation, will meet with locals April 27 to discuss the project.

The design team said it intends to create a relaxing space for NoMa residents.

“Our tunnel proposal for NoMa does what all good urban parks do: it offers a moment of openness, a space to breathe and a place where thoughts can drift away,” the team said in a statement.