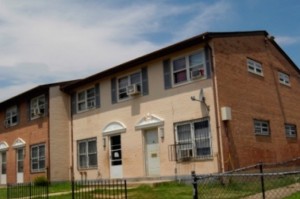 (Updated at 10:30 a.m.) Nine people were arrested in the Greenleaf Gardens public housing complex this week in a major drug raid by police and Drug Enforcement Administration and the Bureau of Alcohol Tobacco Firearms and Explosives agents.

Officials raided a home on the 200 block of N Street SW — a block south of the Waterfront Metro station –about 7 p.m. Wednesday and found drugs and three semi-automatic handguns, the Metropolitan Police Department said last night.

Surveillance cameras recorded members of the alleged crime ring entering the CVS on the 1100 block of 4th St. SW and stealing bottles of the antihistamine promethazine, which contains codeine, the Post reported.

Promethazine is used to relieve allergies and nausea but can also be used as a recreational drug, according to the Mayo Clinic.

Officers said they recognized two of the suspects on the video as members of a group called the Greenleaf Crew, which operates out of the Greenleaf Gardens.

Bertwone Copeland, 19; Bartholomew Copeland, 20; and Keith Boykins, 38, were arrested Wednesday and charged with robbery and drug possession with intent to distribute while armed, police said.