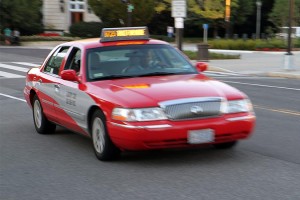 (Updated at 4:30 p.m.) A drunk woman punched a cab driver in the eye last night, slapped another cabbie in the face and then sat on his lap in Southwest, police said.

Shayla Evans, 38, was arrested at South Capitol and M streets SW about 9:30 p.m. Thursday after she jumped into an occupied cab — and then a second cab — and assaulted both drivers.

Evans began her journey downtown, at 10th and E streets NW, where she hopped into the front seat of a cab that already had two passengers, police said. She ordered the cab driver to take her to South Capitol and M streets SW. “Her actions scared the fares and the driver,” and the passengers got out, according to police.

The cabbie drove Evans to her destination, but when they arrived, she refused to pay, police said. She ordered the driver to take her somewhere else.

When the cabbie refused, she punched him in the eye, police said. The driver fled and reported the attack to District Department of Transportation workers.

Meanwhile, Evans walked up to another cab with passengers and tried to enter on the driver’s side, police said. She slapped that cabbie in the face and then sat on his lap.

Evans was charged with five misdemeanors: two counts of assault, two counts of unlawful entry of a motor vehicle and theft, court records show. Her lawyer did not immediately respond to an inquiry.

“Drivers are in a vulnerable state when they get out on the road,” he said.

The group advises drivers to communicate clearly with passengers and turn away potential fares when drivers fear for their safety. They’re pushing the MPD to take assaults on drivers seriously.

“We think the city can go further in protecting drivers,” he said.

Evans was charged in June 2013 with driving under the influence in the District. She entered a plea deal that required community service, according to court records.