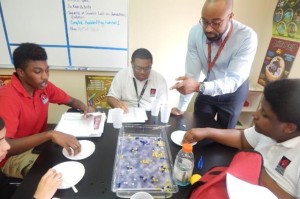 The Capitol Hill campus of Cesar Chavez Public Charter Schools for Public Policy is one of the District’s “most challenging high schools,” according to a new analysis.

The newspaper ranks schools by a score that is found by dividing the number of college-level tests given at a school in the previous calendar by the number of graduates that year.

The school fell between Thurgood Marshall Academy and KIPP College Prep on the list. School Without Walls is the most challenging D.C. high school, according to the Post.