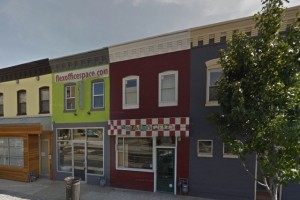 (Updated at 8:45 a.m. Wednesday) A trio of armed robbers stole a tip jar from Manny & Olga’s Pizza on the H Street corridor early Tuesday morning, after they failed to empty the cash register.

The suspects ordered a Manny & Olga’s employee to open the cash register, but after several attempts, the register would not open, police said in an update.

The thwarted thieves made off with the business’s tip jar instead and then drove away in a gray car.

A boy under 18 was arrested Tuesday for participating in the crime and six other armed robberies throughout D.C. that morning, police said in an update. The juvenile, whose name was not released, was charged with three counts of robbery of an establishment, three counts of armed robbery and one count of armed carjacking.

A dayshift worker at Manny & Olga’s, who declined to give his name, said workers do not have free access to the cash registers. Police visited the business today to pick up surveillance video of the incident.

No one was injured, a Metropolitan Police Department spokeswoman said.

Manny & Olga’s corporate office did not respond to an inquiry.