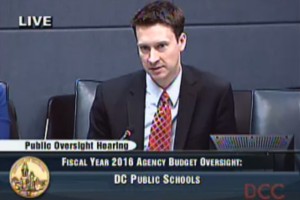 Eliot-Hine Middle School students and their parents received a receptive audience with the D.C. Council today as they demanded major renovations to their school.

The locals pressed the Council to fund significant updates to the Capitol Hill-area school in the coming year, despite a plan by D.C. Mayor Muriel Bowser to leave extensive repairs to fiscal 2019. The school has dated facilities and an outdated HVAC system that often leaves students boiling or freezing, locals said.

“Even though they’re teaching us, it’s hard to learn when the building is so bad,” one seventh grader said.

Heather Schoell, a member of Eliot-Hine’s parent teacher organization, said upgrades were made to the school’s bathrooms after Bowser heard complaints about them at an ANC 6A meeting earlier this month.

During that meeting, Joe Weedon, Ward 6′s representative to the D.C. State Board of Education, said his elementary school-age daughter visited Eliot-Hine and wouldn’t use the restroom there, where some stalls didn’t have doors.

The bathroom repairs are a “good start,” Schoell said. But D.C. must do more to fix Eliot-Hine, which is “basically still a school from the 1950s.”

“Given the antiquated facilities, we are still not a competitive school,” she said.

Eliot-Hine would receive $34.1 million for renovations in fiscal 2019 and 2020 under the mayor’s budget proposal released earlier this month. More than 250 students attend the school at 1830 Constitution Ave. NE, according to D.C. Public Schools.

“It was a mess,” he said. “I’m going to keep pushing and fighting.”